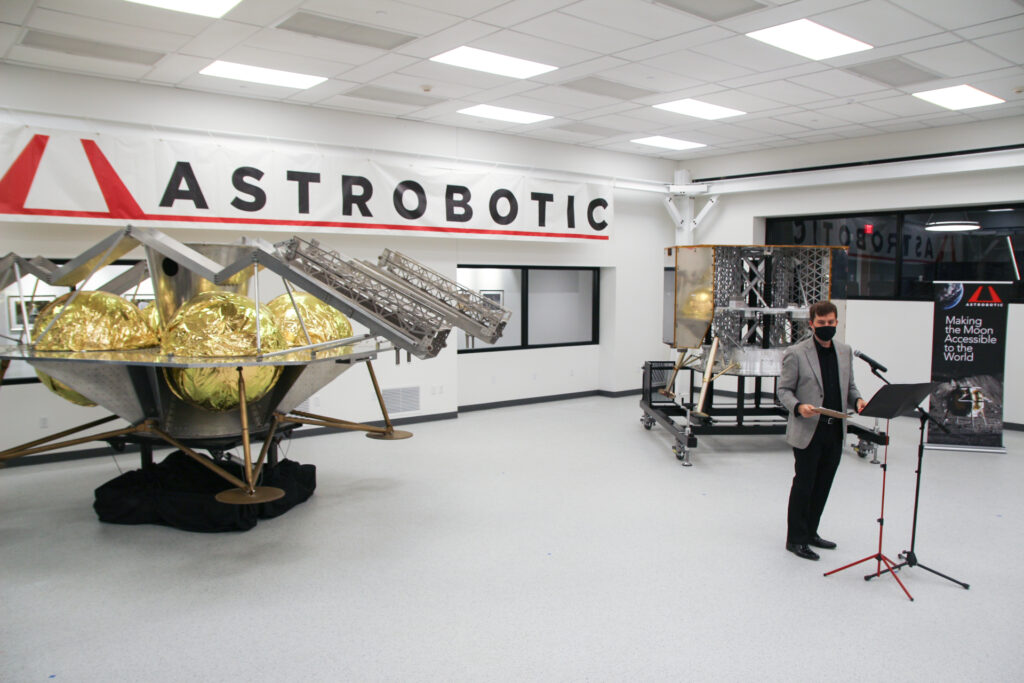 This is the story of what happens when a university, a tech spinout, and a funding partner converge and change the trajectory of a city. The city, in this case, is Pittsburgh. Historically known for steel-related businesses, Pittsburgh is also the home of Carnegie Mellon University, which is where this story begins.

Flyover Future spoke with John Thornton, a mechanical engineering graduate out of Carnegie Mellon and the current CEO of Astrobotic, that is developing space robotics technology for lunar and planetary missions, and Mark Thomas, president of the Pittsburgh Regional Alliance, about how they worked together to create a successful niche.

John, how did Astrobotic get started?

John: Astrobotic was founded by CMU professor Red Whittaker and associates. Our original intent was to compete for the Google Lunar XPRIZE, which was to be the first to go to the moon, drive 500 meters, and send back pictures and video. No one ever won the prize, but it was the catalyst for us and others to get started. We almost went under several times during the early years, and then six or seven years ago we began to focus more on government contracting to keep the doors open.

Our business model focuses on a lunar payload sales model, and we actually made the first commercial lunar payload sale ever. Then we got critical mass for delivery and NASA came in as a large purchase of lunar payload and bought an $80 million package last year and a $200 million package this year for deliveries that they want to send to the surface of the moon. We are now 105 employees here in Pittsburgh’s north side and we’re landing on the moon in about a year’s time. So, we are off and running now.

And I assume you’re not talking about a space version of DoorDash?

We have a commercial customer, for example, that is sending a small, walking, little robot on the surface of the moon purely to demonstrate and see if they can get it to work. We have a program called MoonBox where, for a few hundred dollars, people can send small mementoes to the surface. It’s really all sorts, shapes, and sizes that are being sent up, and then we provide the lander.

Mark, can you talk about what made Astrobotic attractive for an initial investment from The Strategic Investment Fund (SIF)?

Mark: Pittsburgh is a real center, a global center of robotics. And we discovered that that wasn’t necessarily the perception everywhere. Having companies like John’s is a stellar example of what’s possible here. It helps to course-correct that lack of understanding, because we are one of the top-three robotics hubs globally.

SIF’s $6.9 million loan will assist in funding the acquisition and development of the property on Pittsburgh’s North Shore as the headquarters for Astrobotic. This is the coming together of the business community and the private sector to find unique ways to move the region forward. “They do WHAT in Pittsburgh?” That’s the effect we’re looking for.