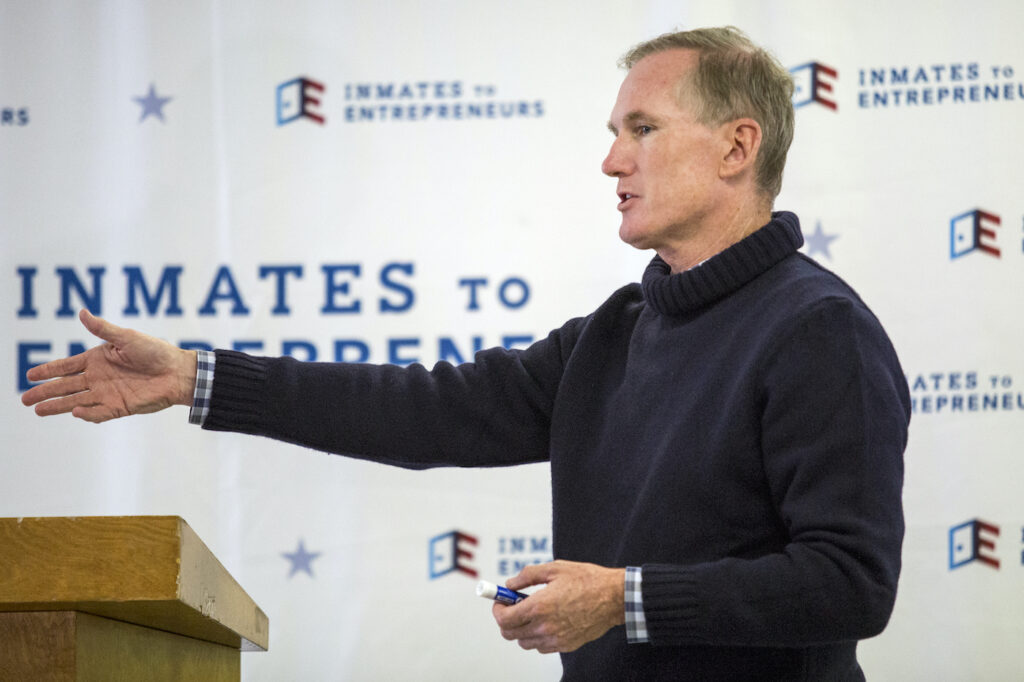 Every year, roughly 650,000 people will leave prison and attempt to rejoin their neighbors as productive members of society. Most will face obstacles when seeking employment because of the stigma of their pasts.

American entrepreneur Brian Hamilton believes everyone deserves a second chance and the opportunity to become a successful business owner. That’s why he founded Inmates to Entrepreneurs, a philanthropic foundation based in Holly Springs, North Carolina that helps individuals overcome systemic discrimination and start their own companies. We recently spoke to Hamilton about his work.

Tell us how Inmates to Entrepreneurs got started.

Hamilton: There was a clear problem that needed to be solved. My friend Reverend Robert Harris and I started Inmates to Entrepreneurs in 1992, almost 30 years ago now. Reverend Harris is a black Baptist minister from Oxford, North Carolina. I am a white Irish Catholic guy from Connecticut. But, it was peanut butter and jelly from the beginning.

It all started when I joined Reverend Harris in his prison ministry. I ended up talking to a gentleman who was incarcerated there during one of the breaks. I asked him what his plans were when he got out, and he said he planned to get a job. I remember thinking to myself at that moment that would be pretty difficult with a criminal record. That was the inception of the idea.

Who does the program help?

Hamilton: Inmates to Entrepreneurs helps anyone who has been judicially involved — not just incarcerated — learn the skills necessary to start their own low-capital service business. Our graduates have started landscaping businesses, catering services, painting companies and many others. I started as an entrepreneur very early on in my life and paid my way through college and business school by running service businesses. My perspective as an entrepreneur is that instead of getting a job, which is almost impossible with a criminal record, [you can] make your own. We’re trying to get the free enterprise system to work for people who have been incarcerated. The second chance is an absolutely vital part of the fabric of the United States.

What’s the data around the problem?

Hamilton: Over 600,000 people are released from prison every year and rejoin society in the U.S. Yet, they’re half as likely to get a job because of their criminal record and face unemployment rates at five times the national average. It’s very hard to get a decent job coming out of prison because of background checks and now even simple Google searches. About two thirds of people who have been in prison are back in prison in just three years.

How does the program work?

Hamilton: Our programs are open to anyone who has been judicially involved. Maybe they’ve gotten a DUI or a failure to appear; maybe they’ve been in prison; maybe they haven’t. We have live (virtual) 8-week courses and an on-demand course called Starter U. In addition, before the pandemic, we went inside prisons regularly to teach courses on starting a business. Our Starter U course is available on tablets inside U.S. prisons and jails. So if you have a friend or a family member who is incarcerated and has access to the content on Edovo or GTL tablets, then they can look it up and take the course that way.

We teach people to fish — how to start low-capital businesses. The courses are very practical and simple. They’re only taught by entrepreneurs who have started their own businesses — so those who have ‘fished’ themselves. We work hard to keep do-gooders and phony-balonies out of our program. People we work with know who is real and who is not. Credibility is huge.

We take them right from the idea through the basics of starting a business. Our focus is on helping people start simple service businesses for $500 or less. Many of the people we serve are coming to the program with very little to no money. Shark Tank is a misrepresentation of entrepreneurship. You don’t need to raise money or pitch to investors to start a business. We meet people where they are.

What kind of success has the program seen?

Hamilton: Since we started tracking, more than 10,000 individuals have taken Inmates to Entrepreneurs’ live virtual courses. In each graduating class, typically 20 to 30 percent start businesses, including landscaping, event planning, catering and cleaning services.

Tell us about Free Enterprise/how it came about.

Hamilton: Free Enterprise on ABC is the TV show manifestation of the Inmates to Entrepreneurs program. Each episode tells the story of someone coming out of prison who has a dream to start their own business and to become an entrepreneur. I love the show because the viewers get to learn about the person and their family and background. It’s good for people to see that these are normal people; they have bones, flesh, spirit and soul.

We are helping people who get out of prison to become the beneficiaries of self-determination, both through the show and through Inmates to Entrepreneurs. Our work is unbelievably fulfilling.

You can learn more about Brian Hamilton here and here. You can also follow him on Twitter at @brianhamiltonNC.