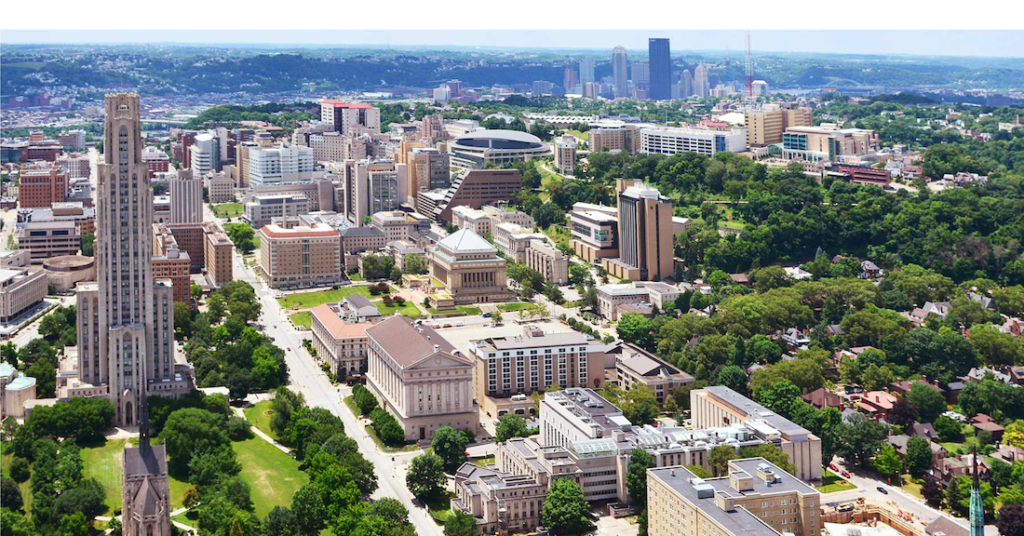 The Oakland neighborhood in Pittsburgh, PA, has been called the best example of a naturally occurring innovation district. While many cities might have one research institution that produces transformative innovation, this one has two, within one square mile of each other—Carnegie Mellon University and the University of Pittsburgh.

It is in the middle of this neighborhood, The Pittsburgh Innovation District is focused on accelerating Pittsburgh’s status as a global leader in the innovation economy. We spoke with three of the principals to learn more about how they’re going to help achieve this: Sean Luther, InnovatePGH Executive Director; Mike Madden, District Director; and Jason Griess, Ecosystem Director.

What’s special about the Oakland neighborhood?

Madden: In the Oakland neighborhood, we have the University of Pittsburgh, Carnegie Mellon University, and Carlow University. We also have UPMC, which is a major healthcare provider. These institutions have been around for some time now, but we are leaning on them to help create the foundation for tomorrow’s economy.

What entities make up InnovatePGH?

Luther: We were convened by the Chancellor of the University of Pittsburgh and the President at Carnegie Mellon, basically at the behest of the foundation and civic leaders. The mayor is the county executive, and we have Pitt’s chancellor, CMU’s president, the CEO of UPMC, which is our hospital system, and the CEO of the Allegheny conference. And we have presidents of the three largest foundations in Pittsburgh.

Madden: You know, there was this recognition that a lot of students are going to our universities but, oftentimes, they leave for opportunity elsewhere. They do this for a lot of reasons, whether it’s funding opportunities, a space to actually host a company and scale, or a desire for mentorship. InnovatePGH was created to be a resource for these students, recent graduates, and entrepreneurs.

Luther: InnovatePGH is one of a series of strategic investments that Pitt and Carnegie Mellon are making to really improve their economic development presence in the region. Carnegie Mellon has kind of a famous 5% walk-away rate. That’s really helped accelerate tech transfer there. We are in many ways connecting the tech transfer ecosystem to the more traditional business attraction and retention ecosystem that runs at the regional level with the Allegheny conference.

One of the ways you’re meeting this mission is through co-working platforms.

Madden: We are focused on creating and expanding our co-working platform Avenu Workspaces. We run and operate two different locations here in Oakland along the Fifth and Forbes corridor in the innovation district. We essentially sublease space off of building owners to create co-working opportunities, whether it’s small office, dedicated desk, flex desk, or larger office space. We’re creating a space for companies to come into, whether they’re local or whether they’re coming from out of market. Sometimes they’re just the Pittsburgh representative of a larger organization, or they’ve actually been growing and scaling inside of our platform. I think that’s been a win for us organizationally that we’re pretty proud of.

Jason, what is your role as Ecosystem Director?

The first phase of this launch is a startup database. The second phase is a research database for both universities. Once the startup database lives side by side with the research database, it will become a powerful portal for anyone out of market to understand very quickly what is happening in Pittsburgh and what’s relevant to their business. They can learn how they can get involved or become an investor in what’s happening here.

It’s sort of a two- or three- or four-step process to get that information in an ad hoc way to out-of-market investors, so we’re trying to streamline that process.

How are you addressing workforce development?

Luther: We have a developing network of tech training. Providers, boot camp operators. And we operate our own workforce development program in concert with the Innovation District, which connects jobs in Pitt and Carnegie Mellon with residents of five adjacent communities that are historically marginalized communities of color.

The end goal is how to expand those systems beyond the universities into the startup ecosystem itself so that companies that are founded in Pittsburgh grow in Pittsburgh. We need to do a better job of aggressively pivoting our training pipeline to make sure that those companies can connect to local talent.

With the resources you have in your city, you could become the next Silicon Valley.

Luther: The official line is that we want to be the next Pittsburgh. We’ve seen what hyper-speed economic growth does in terms of displacement and inequality in other places like San Francisco. We don’t want to replicate that. We want to see the growth in our tech sector to intentionally create economic opportunity for marginalized Pittsburghers, especially in those neighborhoods of color that surround our innovation district. We don’t want economic growth just for the sake of economic growth.

You will learn more about: