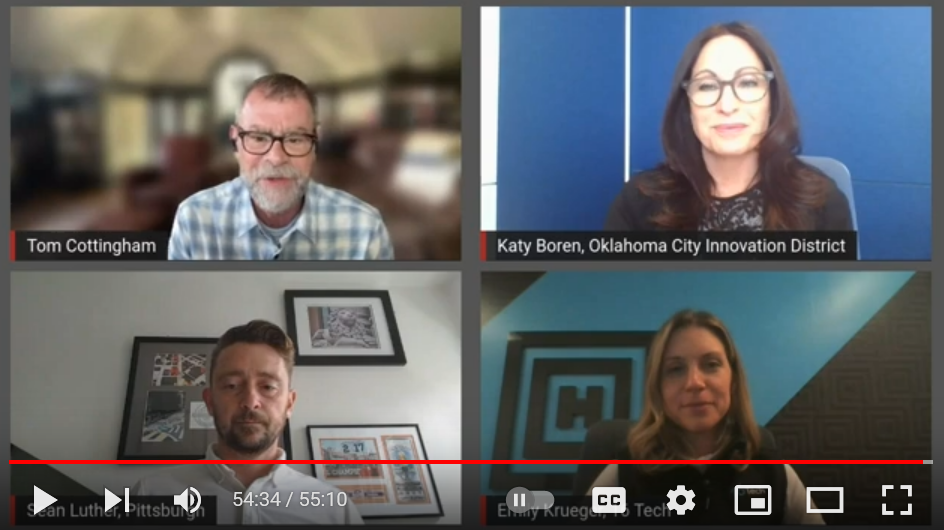 What are innovation districts and are they the model for mid-sized cities who want to become globally competitive? Is your city building one?  If not, should they?

Flyover Future hosts regular virtual events with leaders from across Flyover Country to discuss the innovation trends, challenges, and opportunities in the region. Last week, we tackled these questions and more at our virtual event: Inside Innovation Districts: Partnerships, Physical Assets, & Talent. Our guests were Sean Luther, executive director of InnovatePGH in Pittsburgh; Katy Boren, president and CEO of the Oklahoma City Innovation District; and Emily Krueger, the Chief Operating Officer for 16 Tech Community Corporation in Indianapolis. They shared with us and our audience their strategies and challenges around their initiatives, including the importance of the “mash-up” of physical space, university research, community building, and workforce development.

Here are some of our key takeaways from that conversation.

The Brookings Institution published a study in 2014 called The Rise of Innovation Districts: A New Geography of Innovation in America that described innovation districts as a “mash-up” of a combination of entrepreneurs, educational institutions, startups, schools, medical innovation, and mixed-use development. Unlike traditional science or business parks that simply function as workplaces, innovation districts create places where people can live, work, and play 24/7.

The study offered a conceptual framework for the mash-up but it was left to individual geographical areas to figure out how to make it happen. Our guests explained how they are going about this challenge.

The importance of a physical space

Sean Luther said the first thing his group did was create a place-based program. “The Pittsburgh Innovation District is essentially an overlay within an existing strong neighborhood where our university and medical assets are. This includes the University of Pittsburgh and Carnegie Mellon,” he said. “The Oakland neighborhood is home to about $2 billion worth of annual R&D spend so, in many ways, we are a naturally occurring innovation district. The goal of InnovatePGH specifically is to build an economic development platform and business development effort over top of that existing framework,” he said.

The Oklahoma City Innovation District also got its spark from the Brookings Institution study. The city already had an established medical center, R1 Research universities, and close to 80% of Oklahoma’s NIH funding. But there was no mash-up. “There’s also a lot going on in this cluster in aerospace and defense and unmanned systems,” Katie Boren said. “But everybody was working in silos. The development of the physical area and the epicenter gave people a place to come to collaborate and interact.”

The 16 Tech Community Corporation in Indianapolis is already expanding its physical location. “In the last 12 months, we’ve opened three buildings. We have over 500 people and 16 companies directly working at 16 Tech. We have companies like Eli Lilly, which have put in an innovation flag here in 16 Tech and have moved their digital health team to the district. Amazon Web Services has taken note in terms of what we’re doing. There’s one state in the country that has a partnership around Industry 4.0 with Amazon and it’s Indiana,” said Emily Krueger.

The value of “co-habitating”

Another advantage of concentrating resources in a physical place is that it’s a draw for talent. “When someone is considering a job opportunity here and moving from the coast, an innovation district shows them that there’s more than just one opportunity. It’s important in markets like ours to show potential talent what we’ve got going on,” said Krueger.

It’s also about giving local talent a pathway to success. Boren says that Oklahoma City Innovation District’s geographical location is immediately adjacent to an historic Black community in Oklahoma City. The neighborhood was once a thriving scene for black-owned businesses.

“That neighborhood is baked hard into our mission. We want to make sure the pathways to success start early through STEM education and with upskilling and reskilling with our partners,” Boren said.

One of the driving forces behind any industry is technology and research. Innovation districts create an atmosphere of collaboration among various industries and tech companies. Krueger cites a new programmatic partnership at 16 Tech called AnalytiXIN, which is creating a digital ecosystem to connect university assets and talent to industry needs. “We want to connect some of the top corporations in Indiana, like Eli Lilly and OneAmerica, to our Tier 1 research universities such as Purdue, Notre Dame, Indiana University. They’re all working together at 16,” she said.

Boren said that the Oklahoma City Innovation District isn’t part of a chamber or particular university, a position that gives it an advantage in terms of being a convener and an ecosystem builder. “We really have a great partnership across the city with entrepreneurs and investors, universities, private industry. It’s a big groundswell here.”

All of this speaks to a district’s role in ecosystem development in general. “Having a place-based strategy, having well-resourced organizations, with both physical assets and programmatic missions, can help jump start Tier 2 cities,” Luther said.

Innovation districts play a critical role in building the future of our region and providing us with a competitive advantage. One thing that was clear from our conversation is that innovation district leaders need to think like entrepreneurs. There is not one roadmap that works for every city. Each city must develop its own unique vision of an innovation district based on the assets that currently exist. However, the essential idea for innovation districts seems to be the “mash-up” of businesses, universities, communities, local and state government, virtual and physical spaces, and social connections all focused on building the future today in real time. Building and growing an innovation district requires vision and patience and is a long-term game. The energy that is going into each city’s initiatives is inspiring and we believe they will yield huge dividends in the years to come.

You can watch the entire panel discussion here.