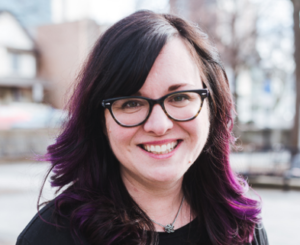 Ann Arbor-based SpellBound offers a platform called ARISE, which is an augmented reality scavenger hunt. What’s unique about the product is how it’s used to help sick children.

In 2018, SpellBound received $652,000 in seed funding from Revolution’s Rise of the Rest Seed Fund, followed in 2020 with a $1.8 million grant from the National Institute on Drug Abuse. We spoke to Founder Christina York about ARISE and her company.

Where did the idea for the tech come from?

York: In 2017, I had a traumatic moment with one of my daughters. She was three at the time and had jammed something in her ear. It should have been a simple thing to remove the object if she had been cooperative, but she was terrified and in pain. The hospital resorted to extreme measures: First, they physically restrained her with a wooden board and Velcro restraints. Then they used general anesthesia so they could get the tweezers in her ear.

My daughter was traumatized, the hospital lost a client, and I received an exorbitant medical bill for the care. It was a situation where I wondered why there aren’t any tools to help engage children in their healthcare journey.

York: We use immersive augmented reality to positively engage patients. ARISE is one of our products. It is a digital scavenger hunt. Some of our patients call it a cross between PokemonGo and Animal Crossing. The concept is simple: The hospital will place wall decals around a patient’s room or in a hallway or rehab gym–wherever they want a patient to be moving. The patient downloads our app and can then point a mobile device toward the decals and they give them tasks.

The tech is mobile?

York: Yes. One of the biggest challenges in patient recovery and prevention of pneumonia or infections. But it was also used a lot for COVID patients who were isolated in their rooms. Hospitals started buying ARISE in order to keep those patients from getting depressed, which is a cause of further medical ailments.

Have you done any clinical studies to test the effectiveness?

York: In 2020, the National Institute on Drug Abuse awarded us a $1.8 million grant to study how ARISE impacts length-of-stay opioid consumption for post-surgical cancer patients. We completed phase one successfully and we’re just starting to get data from that. Phase two started in January, and we’re recruiting 120 patients now for a randomized control trial.

So we’re just at the beginning of that journey. We’ve got some smaller studies going on with some of our other hospitals, like at Joe DiMaggio Children’s Hospital, where they’re looking at how it impacts length of stay for post-appendectomy patients.

What were the advantages of launching a company in Ann Arbor?

York: Ann Arbor has a really robust entrepreneurial ecosystem. There’s Ann Arbor Spark (who we started out with), the city is a smart zone, there’s all kinds of funding available, and we have the University of Michigan. There are a lot of other startups around me so I can meet other founders at different stages and really build my network in terms of investors and other things.

But for me, a big deciding factor to launch here was the talent that was in the area. We gave people here who work in gaming and AR a reason not to head out to the coast to find work. The College for Creative Arts in Detroit is one of the top art colleges in the country. Many times, those students graduate and take off because there’s no work here. We came in at a time where we could go to their meetups or show up at their student events and advertise our company. We are a gaming company that’s serving health care. We told them that we had a mission and they could stay and work for us.

You can also draw from other industries in your area that are using similar tech.

There were plenty of people modeling trucks for GM. It was a huge opportunity for us to start hiring from this talent pool and not compete for the talent, say, in terms of the salaries that we would on the west coast. They got to stay where their friends or family were and it was just a really great opportunity for us.