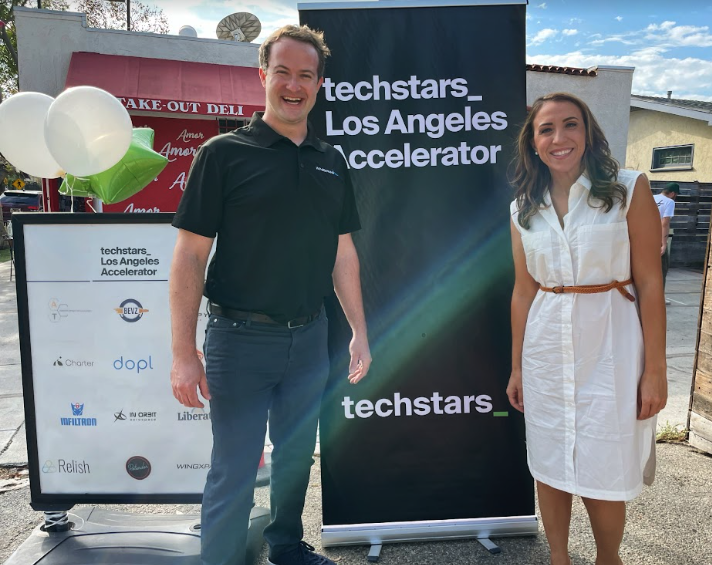 Our goal at Flyover Future is to highlight the innovation and entrepreneurship going on in the heartland of the U.S. This week, we touch down in St. Louis, a city becoming known for its work in geospatial intelligence, to speak with the co-founders of WingXpand, an aerospace startup that manufactures aviation and aerospace components. James Barbieri is co-founder and CEO of WingXpand and Michelle Madaras is its co-founder and chief customer officer. We spoke to them from Los Angeles where they are participating in the TechStars program.

How did WingXpand come about?

Barbieri: I’m an aerospace engineer by trade. Back in the day, I learned that the drones, or what they call UAVs (uncrewed aerial vehicles), used by soldiers are typically transported in huge boxes that are extremely cumbersome. These drones require over a month of training and sustaining them and keeping them working was really tough. And so I thought, hey, how can we make the drones more compact?

I decided it was to take the largest part of an aircraft–the wing–and make it smaller and easier to use. So I invented expandable wing technology to take a really large aircraft wing and fit it into a really small, easy-to-use package. Fast forward to today, these problems exist with our government customers and even more so on the commercial side, which is growing 30 percent year over year. That’s where Michelle has a lot of perspective.

Madaras: I worked in the news industry and we were actually very early adopters of drone technology–mostly professional-grade systems like quadcopters and the like. More importantly, I worked with a lot of police departments and fire departments on search and rescue and SWAT-type situations. They were using the same professional-grade, mostly quad copters that I was using and we kind of commiserated over some of the drawbacks: battery was only about 30 minutes and the cameras on them are really only about as good as a cell phone. They didn’t work in all the weather conditions that we as professionals found ourselves in.

And that’s really what helped us develop WingXspan as a powerful and capable system that is easiest to use. This will be the first time a system like this is available to the commercial market as well as the defense market. That’s where we’ve gotten a lot of traction.

When did you launch?

Barbieri: We officially launched to the market in April of this year. And we’ve hit the ground running. We’ve worked with a lot of different folks across those user communities, government and commercial. We’re so excited to be really very close to our initial deliveries of those units. We’ve worked with such amazing engineers along the road to get it to this point, from a development standpoint, and now we’re really in that initial manufacturing throw to get it across the finish line and into the hands of our customers.

You mentioned the cameras were only as good as a cell phone before so you improved that aspect. What is your improvement?

Madaras: We offer three baseline options, but we also can do custom integrations for folks that have specialty needs as well. We have a multispectral option if you’re trying to do crop health, or a DSLR if you’re trying to do three-dimensional photogrammetry mapping of buildings or structures. Then we have EOIR, which is a gimbal camera that has 40 times zoom. They’re truly powerful cameras that can be used for any kind of oversight application.

How has your company been funded?

Barbieri: We bootstrapped the company initially. Then we were selected for the Techstars startup accelerator. We were privileged to have been selected out of 600 customers for that program. The Techstars team is really focused on accelerating our business and helping us drive the most amount of value that we can deliver to our customers. Techstars was the first outside venture capital dollars that we have brought into the company.

Tell us about the advantages of being located in St. Louis.

Madaras: I’ve probably been there about five years, but it’s just been a wonderful and a really supportive community. It’s actually really a great place for startups. The community’s been super welcoming, super open, ready to connect and ready to help. I feel like it’s a big city with that small town feel. Also, it’s becoming a great place for female entrepreneurs. In September, PitchBook said that St. Louis is the city that’s growing the fastest for female founder fundraising.

Barbieri: I was born in St. Louis, educated in St. Louis, and I went to Washington University in St. Louis for my MBA. It’s such a vibrant startup ecosystem. For entrepreneurial education, there are so many programs that offer guidance. Our company is actually based out of the T-REX, a technology incubator that offers a vibrant geospatial ecosystem. The NGA (National Geospatial-Intelligence Agency) is building a new facility in our backyard. There’s so much excitement in geospatial and aerospace in St. Louis, with the talent coming out of our schools and the real push for innovation.