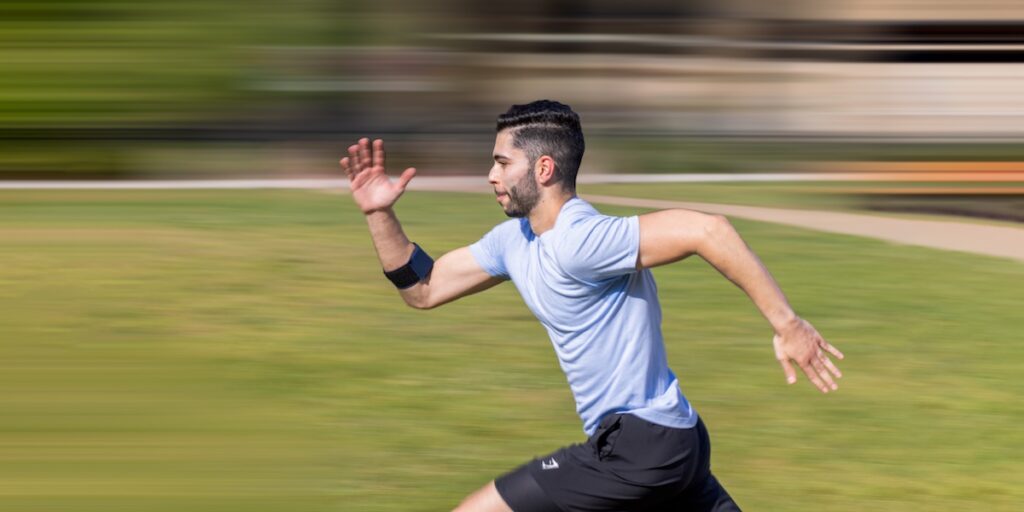 SweatID, a startup founded in 2017 by Dr. Chelsea Monty-Bromer, PhD, wants athletes to rethink the way they learn about their health. The company uses science to measure sodium concentrations of an athlete’s sweat in real time and provide actionable data through a personalized plan. We spoke to Monty-Bromer about the company’s creation.

What was the impetus for the launch of SweatID?

Monty-Bromer: When I was a professor at the University of Akron, we were looking into fabric sweat sensors for people with lower limb amputations. We were trying to design fabric sensors that can monitor the prosthetic socket interface, and prevent sweating. It was supposed to kick on a cooling device but the cooling device used too much power. So we had kind of an orphan technology. We had these fabric sensors that could detect all sorts of different things and we didn’t have any one to use them.

Monty-Bromer: We participated in the National Science Foundation’s Innovation Core program and started talking to a lot of different people. We realized that athletes are really looking for a way to monitor how much sodium they lose while they exercise so they can remain properly hydrated. So we kind of put the other sensors on the shelf and really started to focus on sodium monitoring with a fabric sensor.

Not getting proper hydration is a big problem for athletes, correct?

Monty-Bromer: I met the race director for the Boston Marathon at CES this year and he said about five to 10% of runners end up in the medical tent because they’re not properly hydrated. They don’t have medical history on these runners to figure out what their baseline should be and how they should rehydrate them. So they’re actively looking for something from the race director perspective, not the athlete perspective.

We spent a lot of time in Kona at the Ironman World Championships and saw that they have a lot of issues with athletes over-hydrating, which is drinking too much water, and then they don’t have enough sodium to properly function. They end up in the medical tent with IVs for sodium, or even in the hospital because they just can’t function.

Monty-Bromer: I really believe no one has ever been able to monitor sodium loss in real time before. So there’s some questions that we have to answer before we feel really confident about giving feedback to our athletes. The first thing we do is provide athletes with their “sweat profile.” They’ll get a number that shows how much sodium they lost. For example, this is how much sodium you lost when running a marathon in 80 degree weather. They can then take that data to a coach, or somebody who has the ability to digest that information and tell them what to do with it.

We’ve hired a data scientist to machine learn these profiles. That’s when we’ll start to do recommendations for our athletes.

How did your geographic area contribute to your company’s launch?

Monty-Bromer: There’s a lot of institutional investment from the city of Cleveland and there’s a lot of people in Northeast Ohio who really want to help companies. We got a lot of help from the Bounce Innovation Hub. There’s a lot of small government-funded entities that specialize in helping small companies grow and without that I wouldn’t have been able to grow as an academic founder. On the science side, I would have been able to grow the company because they gave me the ability to act like a larger company without having to pay a lot of money. But I didn’t have to hire a CFO and a CEO. I could kind of fractionalize those out to all of these entities in Northeast Ohio and really grow.

It seems like the cooperation aspect is a Midwestern thing.

Monty-Bromer: Yes. Since we’re close to Case Western Reserve University, they always invite us to come and be a part of their booth at CES. Even though we’re not associated with Case Western, the ecosystem is small and we all want to help each other grow. We know that if we’re arguing about resources, none of the companies are going to succeed. So we all try to help each other out so we can succeed together.