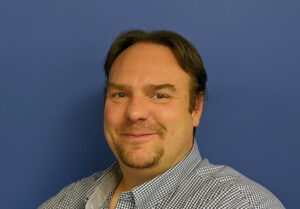 Eric Wagner worked at The Ohio State University (OSU), where he oversaw commercialization of new innovations and supported the launch of over 22 technology startups.

One of those startups was Ubihere, a software company located in Hilliard, Ohio, that develops next-generation real-time location systems. Ubihere’s patented artificial intelligence (AI) technology is the next-generation standard for asset tracking across an array of industries including health care, warehousing and manufacturing.

Ubihere has received more than $11 million in research and development at OSU in support of the “Return to the Moon” and “Mission to Mars” programs. Recently, the company was awarded a six-month, $150,000 contract from the U.S. Air Force to apply its patented technology, Ubivision, to drones.

Flyover Future spoke with Wagner, who is now the executive vice president of government programs at Ubihere, about the company and the tech behind it.

Wagner: It’s a patented process and method for geospatial awareness and recognition — how to find things in a 3D space. The starting premise was, ‘how do we recognize where things are in relative position to each other without GPS or other stimulus?’ The technology is based on video processing technology created by Dr. Alper Yilmaz, who has a nationally recognized geospatial analytics lab at OSU.

Wagner: My partner and I met Dr. Yilmaz when we were building the Center for Design and Manufacturing Excellence (CDME), a 60,000-square-foot innovation center at Ohio State. We were helping university professors get their technologies out there as products. Ubihere was one [technology] that we paid special attention to because we knew its potential valuation.

In 2016, Dr. Yilmas decided to spin his company out. Like a lot of university research spinouts, it didn’t necessarily move that fast. Rev1 Ventures was trying to incubate and mature that technology. They contacted me at Converge Ventures when we were starting and asked us to take a substantial role in the company to mature it. We agreed and launched the company in the spring of 2018. From there, we’ve been taking that patent and turning it into a suite of products.

What kind of products?

Wagner: We’re focusing on a suite of intelligent tag systems that we call UB Tracks. It’s a relatively low infrastructure footprint for indoor/outdoor tracking of assets, people, equipment or whatever it may be.

There are a number of real-time location systems (RTL) out there trying to accomplish indoor tracking, making it easy for large, multi-facility and water-building facilities like health care campuses, to track their assets across an entire campus. Those solutions were falling short. For instance, they promised two years of battery life but were dying in six weeks. They promised they would be super accurate, but they spent too much time trying to find the things that they had tagged to know exactly where they were. They just weren’t getting there.

That’s when we started our first product line. It was initially funded internally, and then the U.S. Air Force funded about $1.2 million of further development of the technology.

Is the tech in use right now?

Wagner: We are currently at Dyess Air Force Base, tracking aerospace ground equipment for the 7th Bomb Wing assigned to the Global Strike Command Eighth Air Force. They are already lining up funding for the next two bases to start tracking assets across those bases.

Who is the customer for this tech?

What are the advantages of having a startup in Ohio?

Wagner: In Silicon Valley and New York, funders are starting to recognize the possibilities in the middle of the country. They’re starting to do more funding, and I think it’s going to open up more.