Image by Dan76 for Shutterstock

Today’s job market is a boon for those looking for jobs. But for businesses trying to hire and keep tech talent, it’s a struggle – especially for technology companies. Though tech companies have recently shed some workers with layoffs, the highly skilled tech jobs are still in very strong demand.

The demand for staff isn’t likely to get any better for a while: The IMF predicts that the global shortage of skilled workers will rise to 85.2 million by 2030.

According to Dice.com, there are 11 fast-growing careers that are in highest demand.

Here they are with their year-over-year growth percentage.

The struggle for tech talent

LinkedIn’s talent blog in July agreed that software engineers were the most in-demand overall and they have a higher-than average turnover rate.

While the Dice report didn’t mention cybersecurity, we also know that security talent is in extremely high demand. A June 30 article in Fortune said that “companies are desperate” for cybersecurity workers. As of November 2021, there were 715,000 job openings to fill.

In an analysis of more than 200 job boards looking at demand for cybersecurity skills, there have been 554,432 jobs posted for cybersecurity related roles in the past year. That’s up 63% year-over-year, said Raleen Gagnon, VP Global Market Intelligence at ManpowerGroup. 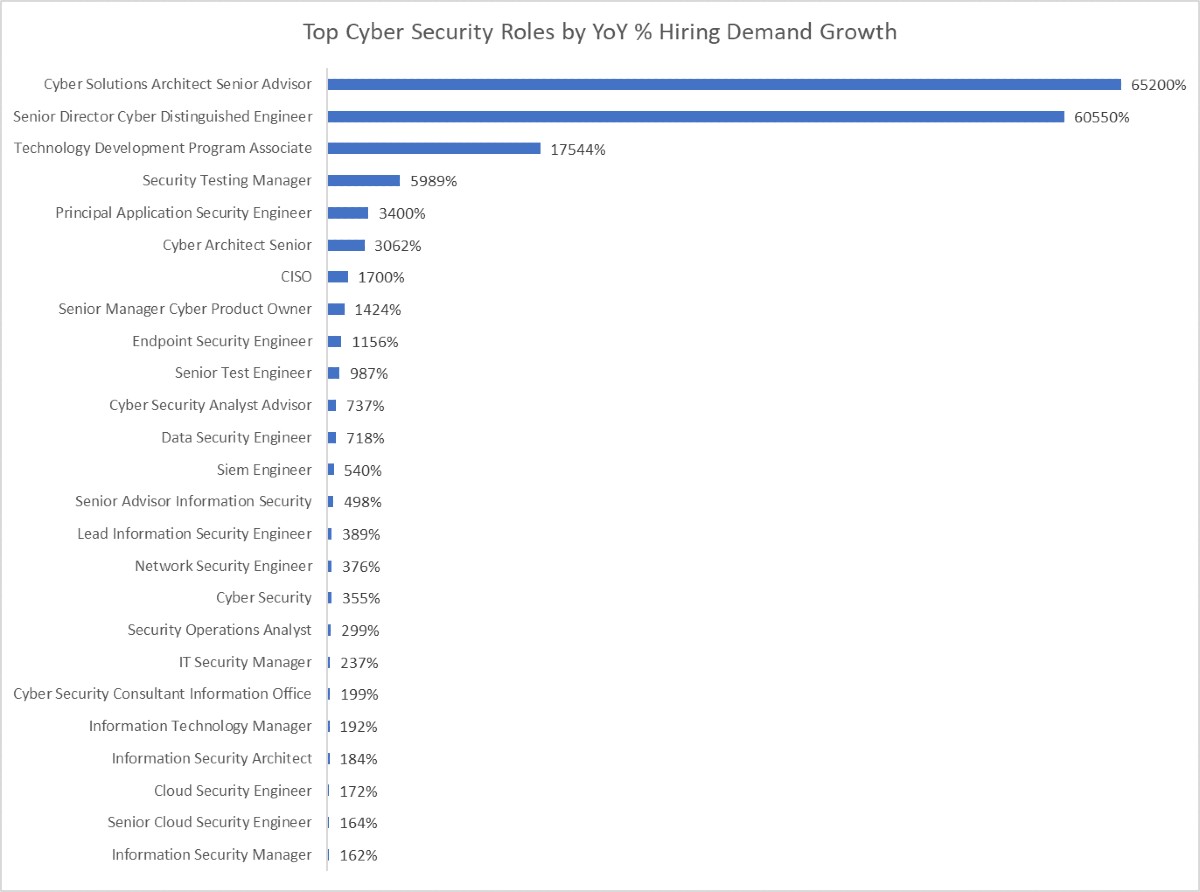 How can you compete?

The hard truth is that you can’t compete with Meta, Google, Amazon or Microsoft. They’re huge companies with deep pockets. And skilled workers know what they’re worth financially, which means you have to offer them more than money.

A soul or purpose is a good start. “Even though very large companies have name recognition and huge compensation packages, they also have their own set of problems,” said Valerie Brewer, IT Recruiter and GM of Global Recruiters Network Fort Smith. “Knowing and addressing these problems is where a smaller business can shine.”

Some reasons workers shy away from tech giants, according to Brewer:

“If a smaller firm is doing these things right, AND they also have a good culture, they should not have problems finding good people and hiring good people away from the heavies,” Brewer said.

Some large organizations are just terrible companies that treat workers poorly, pay lower than market value, get caught breaking the law, make unethical decisions and other bad moves that make potential employees cringe. With the job market so strong, workers have the freedom to avoid an ugly atmosphere.

Go back to school

One way to boost your hiring prospects is to work with universities and try to get some new grads, either as interns or new hires. There are many within driving distance of most flyover companies, including some that are top-ranked or have recently gotten huge grants to boost their tech programs.

According to U.S. News and World Report, some of the top software engineering universities are in flyover country, including the No. 1 school: Carnegie Mellon.It’s also tied for No. 1 in computer science (with MIT). Ranked fifth is University of Illinois in Urbana-Champaign, Ill. North Carolina State and Purdue are tied for No. 9. But there are many more who are excellent at graduating good technologists.

Get to one of their career fairs as soon as possible so you’re on students’ radars throughout the coming year. Network with students, grad students and professors so expand your recruiting pipeline. Even if students start school with a goal of working at one of the biggies, things they learn could change their minds. Make sure you tout what makes your organization special.

When you have good people on staff, make sure they don’t leave for greener pastures. While you can’t prevent everyone from leaving, you can make staying more attractive.

A recent survey by LinkedIn cited the tech and media industries as having the second highest turnover rate (12.9%), only surpassed by professional services (13.4%). So, tech leaders have a mountain to climb.

“For a lot of folks, money is not the most important thing,” Brewer said. She listed some ways to keep good employees:

Though money isn’t always the driving force for job seekers, it’s still important. Financial growth for your employees should be a concern in your business. “Pay them a salary which is on par with market standards,” said Rajiv Talreja, author, entrepreneur and business coach on his YouTube lecture, “How To Retain Team Members?: 3 Ways To Avoid Attrition.” “You can’t expect people to focus on the work if they’re worrying about the money, so pay them as per market standards or a little even above it.”