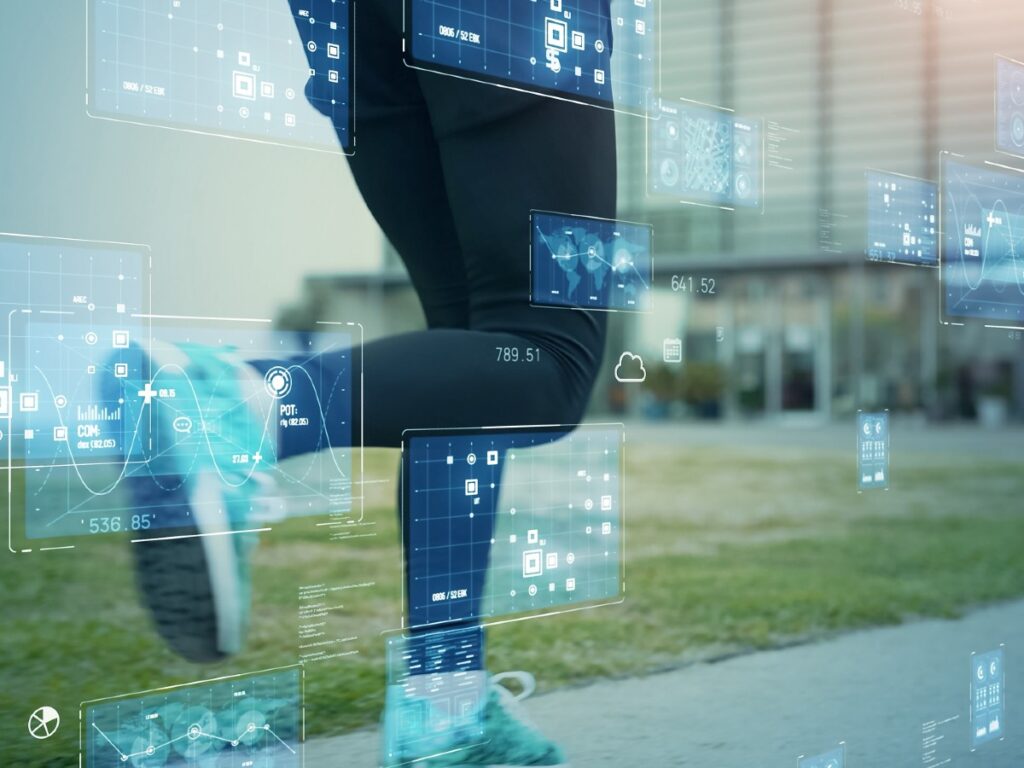 How many people do you know that have a smartwatch or fitness tracker they wear all the time? Or follow their favorite team with undying loyalty? (Yeah, us too.) Well, turns out we’re trendy!

A recent whitepaper by Markets and Markets says that the sports technology industry is expected to grow from $21.9 billion in 2022 to $41.8 billion by 2027. Another report by Grand View Research says the market will be at $55.14 billion by 2030. Is your business on this trend? Maybe it should be.

Here at Flyover Future, we’ve covered several sports technology companies in the midwest, so we knew there was something going on. These reports just confirmed our suspicions.

According to Grand View, in recent years, professional sports organizations have been using new technologies like smart stadiums, sports data analytics, wearable gadgets and digital signage to engage spectators, improve team performance and create smart infrastructures. Manchester City soccer club, along with Cisco, released a smart scarf that collects data from fans to learn what makes them happiest. (Uh, we’re pretty sure the answer is goals.)

As it is everywhere, data is king, and Louisville startup EdjSports and its parent EdjAnalytics use data to help athletes, teams and fans to improve performance. We interviewed founder Sean O’Leary back in 2019, who said accessibility is an important benefit of starting a business in Flyover Country. “If you can build a really great company culture here and give people opportunities to grow, you can keep your turnover really low. There are fewer opportunities for people here, but at Edj, we try to build a situation where people can’t imagine working anywhere else,” he said.

Last summer, we interviewed James Clark and Brittany Harris, the founders of Rave On Sports, a Lexington-based app that allows fans to comment during games. Harris noted that while sports is a religion in Lexington and Kentucky, there hasn’t been much investment here in sports tech: “We’re kind of outside of what I think people traditionally invest in in Kentucky; we’re kind of sports tech. Kentucky has primarily been a lot of agriculture, a lot of bourbon, but that’s really kind of changing right now. And there are a lot of new businesses and new ideas coming out of Kentucky.”

But not all sports are based in Kentucky (don’t say that to someone born here). Last year, we chatted with Chris Knutson, the founder of TeamGenius, an app that helps coaches aggregate data during sports team tryouts. He said he’s passionate about the startup culture in Minneapolis, where he’s based. “There are some key players who are really interested in connecting people and in supporting the ecosystem. Access to capital is improving. Our investor, Great North Ventures, has made a really big effort to create more access to capital at the seed stage,” Knutson said.

These are only some examples of the vast sports technology field in Flyover Country. Some others are Mpruv Sports out of Basehor, Kansas; Aviv Sports, based in Lexington; and Indianapolis – another sports-crazed town – has its own Techstars Sports Accelerator.

No matter where in the midwest you’re based, if you’ve got a sports tech product idea, there’s no time like the present to get it to market.