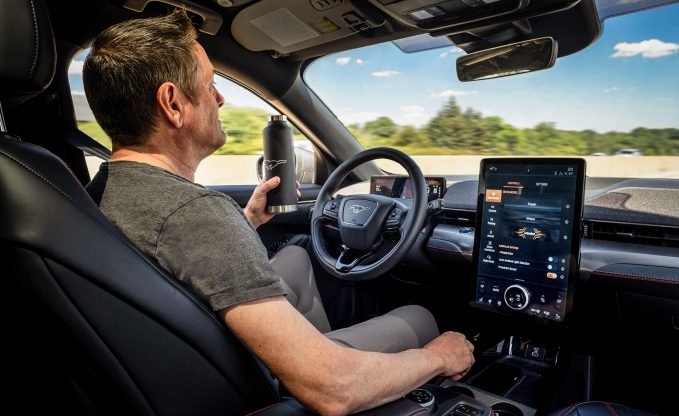 The technology, called Active Drive Assist, is similar to Tesla’s Autopilot and General Motors’ Super Cruise features, which use sophisticated cameras and sensors to keep their cars going without input from drivers. All are intended mainly for interstate driving but software updates will eventually cover most road types. Active Drive Assist will begin rolling out in the third quarter of next year and eventually become available on other Ford models.

Car makers have been taking baby steps toward autonomous driving for several years now. Existing “intelligent” cruise-control options monitor the road and other vehicles to manage speed, and lane-centering technologies keep cars in their lane without input from the driver. And while fully self-driving cars are still a bit far off in the future, tech like Ford’s Active Drive Assist, which is seen as more accessible to middle-class drivers, is a leap forward.

Unlike truly autonomous driving, where the driver of the future will be able to Netflix and quite possibly chill while driving, current technologies aren’t so sophisticated. An infrared camera system monitors your eyes and head position and warns you when your attention wanes. If you don’t pay attention the car will slow down and eventually stop.

Ford has other goodies in store for its new autopilot tech, including stop-and-go capability in heavy traffic and “intersection assist,” which helps with left turns in busy intersections. While Ford hasn’t named a price for the new hands-free Mustang, industry watchers expect it to be more affordable than a Tesla.