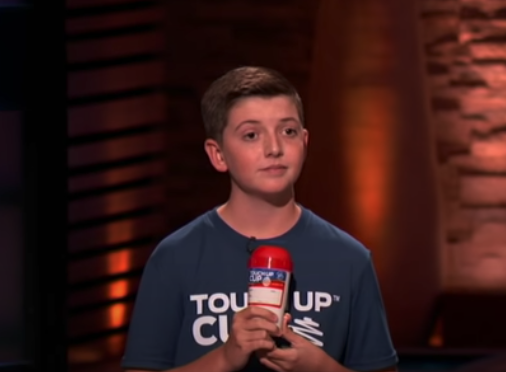 A fifteen-year-old Cincinnati high school freshman and his father have landed an equity deal on the hit ABC show “Shark Tank.” Carson Grill and his dad Jason Grill won a $150,000 investment from Blake Mycoskie, one of the “sharks” and the founder of Tom’s. The Grills invented a plastic storage cup for paint called Touch Up Cup. Their company is on track to log $400,000 in sales in 2020.

Touch Up Cup elegantly solves a common household problem: how to store paint. Once a paint can has been opened, it’s hard to get it to seal properly, causing the paint to go bad or the can to get rusty. Touch Up Cup keeps paint in a handy plastic cup with a metal spring inside. Just give the can a shake and you’re ready to do some touch-up painting.

All the sharks were impressed with Carson, who wowed them with his business acumen. Even before their Shark Tank appearance, the father-son duo had found success, getting deals with Walmart and Home Depot to sell their product. Besides Touch Up Cup, the inventors hold three design patents for other types of storage containers.

Wondering how to pitch a product? You can see the 15-year-old wunderkind in action on Shark Tank by clicking here.