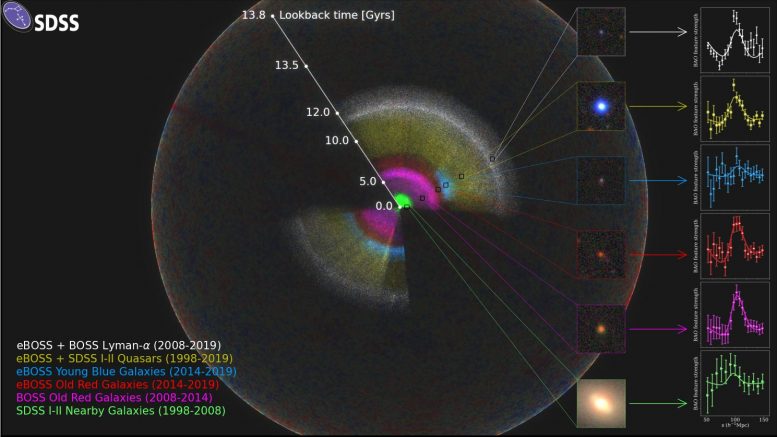 Scientists have created a 3D map of the universe, offering hope of providing answers to some of the universe’s most perplexing and challenging questions. The map, which is the largest 3D map ever created, represents decades of data collection and analysis by more than 100 astrophysicists, as well as the publication of 23 academic papers supporting the work.

The collaboration, known as Extended Baryon Oscillation Spectroscopic Survey (eBOSS), extended previously existing maps by using quasars and faint galaxies. Perhaps the most intriguing aspect of the work is the mystery of dark energy. The map shows that until about six billion years ago, the expansion of the universe was slowing. Then, for some unknown reason scientists attribute to dark energy, the expansion began to speed up. Understanding this acceleration and reconciling it with existing theories of dark energy are topics for further research. Another is whether new research is consistent with general relativity theory.

Scientists at The Ohio State University have been contributing to the effort for a couple of decades, including David Weinberg, chair of the astronomy department at OSU, and Ashley Ross, the eBOSS catalog scientist and a lead author on one of the papers. “One of the things we want to learn about is the time evolution of dark energy—this mysterious thing that is causing the universe to accelerate,” Ross said. “Cosmologists are fiercely debating whether this conflict is an error in the measurements or is telling us something new about fundamental physics.”

You can check out a video explaining the project here.