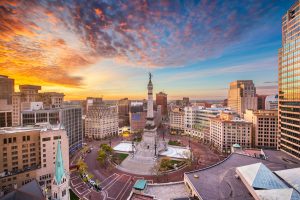 The big bang for a burgeoning tech hub is sometimes hard to pinpoint, but for Indianapolis it was definitely the $2.5 billion acquisition five years ago of ExactTarget, a locally funded email marketing automation company, by sector giant Salesforce.

Since then, tech startups have exploded in Indiana’s capital. Accelerator TechPoint lists 350 startups in the 2 million metro. Much, but not all, of the activity has been around sales and marketing tech, a booming sector—digital marketing spend is expected to reach $120 billion by 2021.

We’ve actually been at this a while now, thanks

ExactTarget wasn’t Indy’s first tech startup success. Angie’s List moved to Indy in 1996, just a year after being founded in Columbus, OH, and IBM spent $200 million to purchase Software Artistry in 1999. (We need to note that locals revere Bob Compton, the prime mover of Software Artistry and investor in several dozen other tech companies, including ExactTarget, as the Johnny Appleseed of the Indy tech boom.)

But after the Dot.Com 1 bust, economic leaders in a lot of towns were leery of tech startups, and Indy was no exception. Local firms that weathered the burst continued to show steady growth, and then came the ExactTarget deal. For the last five years, the tech hits have kept on coming. Indy even made the short list for Amazon’s HQ2—for whatever that was worth.

The more, the merrier

Back in the real world, Indy keeps landing deals:

What’s driving this growth? VentureBeat recently talked to former ExactTarget execs about the tech startup climate in Indy and found that the SaaS deal brought more than just an enormous influx of capital to town. But it was an ENORMOUS influx, and it’s fostered a climate the embraces risk. Seed capital for startups grew to $14.8 million in 2018, up from just $1.05 million in 2013.

ExactTarget’s leadership DNA can be found in a slew of Indy marketing SaaS startups, Including Sigstr, Zylo, Pattern89, and Compendium. And this success has fueled ongoing interest from coastal tech giants; SalesForce and Infosys recently announced plans to add more than 5,000 jobs.