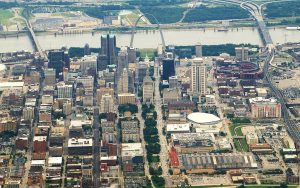 Flyover Future is all about celebrating the cities in the heartland of the U.S. They’re abuzz with innovation and growth and we want to be your guide. This week we look at St. Louis.

Known for its iconic 630-foot Gateway Arch, St. Louis, MO, has established its reputation as one of the fastest-growing hubs of entrepreneurial activity.

The city is built on the hallmark of exploration and expansion, with the lore of adventure sewn into the very fabric of the city. The 19th-century explorers Lewis and Clark, honored by the Gateway Arch, serve as champions for the St. Louis startup community two centuries since their famed explorations.

The city has even earned itself a spot on the Forbes Top 10 Rising Cities For Startups list, second only to Columbus, OH, and beating out major contenders such as Atlanta, Denver, Philadelphia, and Charlotte.

Forbes also noted that the value of venture capital investments in St. Louis from 2015 to 2018 was up a whopping 90% compared to the preceding three years, with 146 venture capital deals in the most recent three-year span.

Essence Group Holdings has led the charge in funding, with a combined $407 million in four raises since 2011.

What sets St. Louis apart from major metropolitan startup powerhouses such as San Francisco and New York City is that it’s built on home-grown talent, and not necessarily high-profile opportunity seekers.

However, as living costs continue to rise in major cities, many companies are setting their sights on more cost-efficient locations that allow their employees to maintain a higher quality of life.

In an interview with EQ, Scott Bernstein, a principal at Lewis & Clark Ventures, dubbed the first $100,000,000+ tech venture fund in St. Louis, claims the city’s location is a huge advantage for talented entrepreneurs from all over the world.

“Well the fact is, for many startups, the location of a company’s headquarters matters less now than it ever has before,” Bernstein said. “In the past, your location was a constraint: it limited what kind of business you could start and scale. In the digital age, your location is an opportunity: if you find a place with the right balance between cost, capital, and access to talent, it can help accelerate and multiply your growth.”

As an early-stage startup hub, St. Louis has a ton of potential that will be further realized on a national scale with a few successful exits, either by St. Louis startups or by companies invested in by St. Louis investors.

In comments to the St. Louis Post-Dispatch, Brian Hopcraft, managing director of Lewis & Clark Ventures, said, “The more successful cities have had exits that are more substantial. Certainly a couple of big exits in the next couple of years will help St. Louis.”

In the same issue, Cliff Holekamp, a principal at Cultivation Capital, noted that the city is still young and its entrepreneurial dynamics and infrastructure should be looked upon as such.

“Entrepreneurial, early-stage investing is a long-term strategy,” Holekamp said. “It takes seven to 10 years to get a return on capital. We are just at the earliest edge of when you would start to expect returns.”

There is a certain loyalty unique to the St. Louis community and the surrounding area that acts as an undercurrent throughout St. Louis’s professional world. The pride of St. Louis, combined with a few successful exits, creates a synergistic mix that emphasizes achievement and exploration with Midwestern family values and neighborly culture.

St. Louis by the numbers